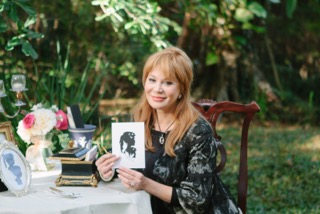 Collaborated by internationally acclaimed silhouette historian Peggy McClardand master silhouette artist Cindi Harwood Rose.
Miniature portraits had been the rage of aristocracy whom had worn portraits as jewelry since at least the 15th century.  But for 300 years, the expense required for a full color likeness to be commissioned had restricted the availability to the wealthy and kept the ordinary person from acquiring a portable likeness of their loved ones.
At the beginning of the 18th century a theory called “physiognomy” became vogue.  “Physiognomy” was defined as the art of discerning the character of the mind from the features of the face.  In 1775, Swiss theologian and poet Johann Kaspar Lavater wrote a treatise Physiognomische Fragmente in which he attempted to elevate physiognomy to the level of science.  The translated version of Lavater’s book was a best seller in England and the book’s heavy use of silhouettes to illustrate Lavater’s theories helped elevate the popularity of silhouette cutting.
With the advent of Lavater’s widely read treatise, shade portraits became popular with the masses as a cheaper alternative to full color portraits.  Originally called "Profile Shades" or "Shadows" in England, the French coined the term à la Silhouette as a derogatory reference to Louis XV's former French Minister of Finance, Etienne de Silhouette, who was considered a cheapskate.  Legend says that when de Silhouette left his government position, he retired to a farmhouse which he decorated with home-made paper cuttings.
The History of Silhouettes - Part 2 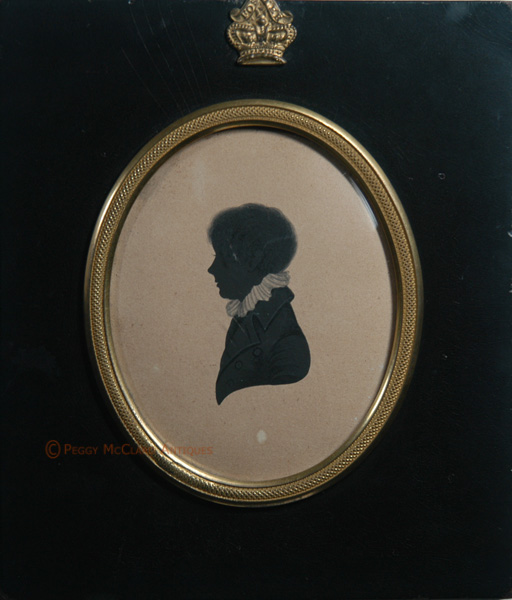 The History of the Silhouette 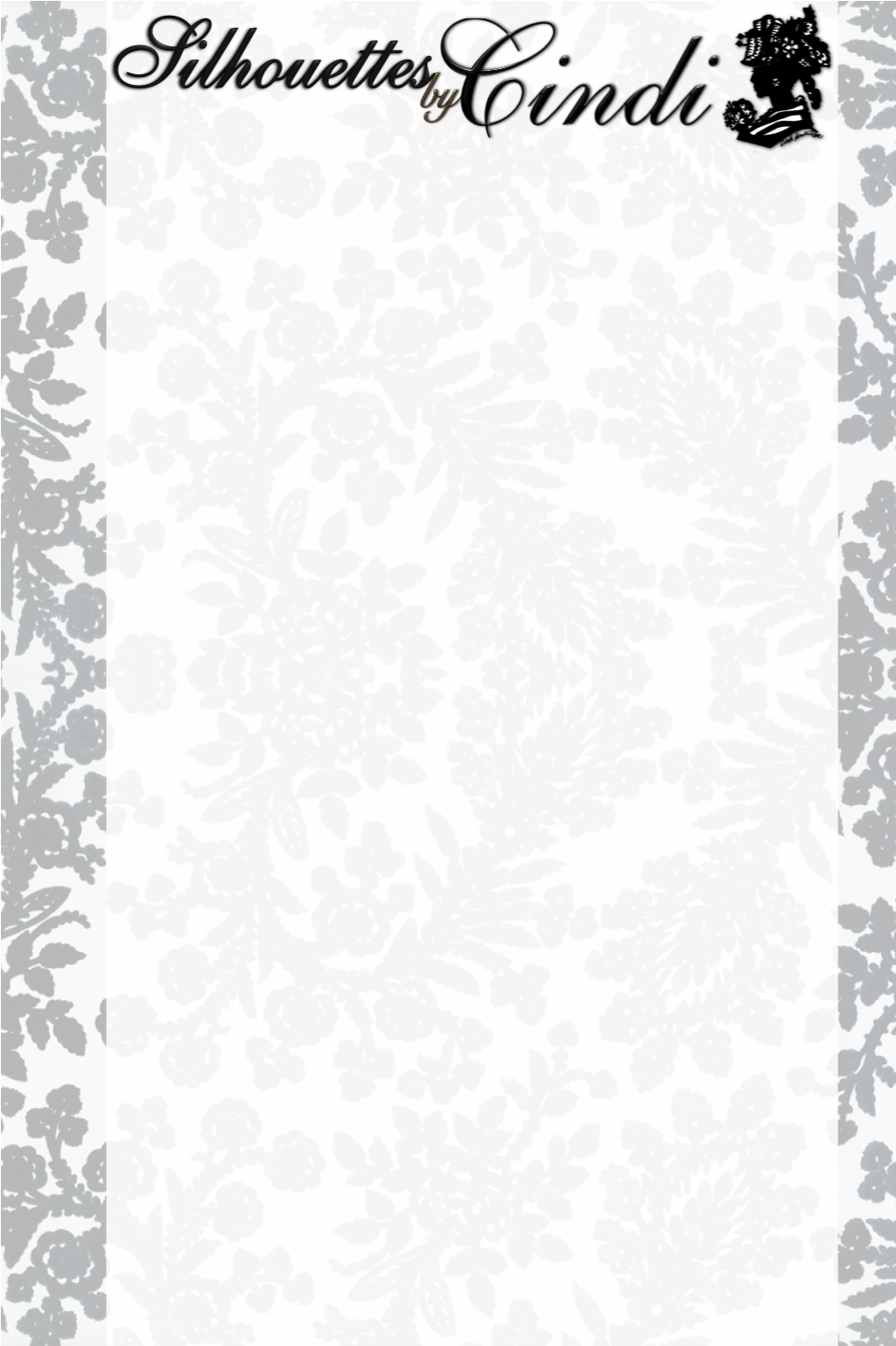 How to hand-cut a silhouette

People always ask me "how did you learn to cut portraits freehand?
The truth is I never did learn, I just could always draw anything and anyone in pencils and crayons. From my sketch pad, I got a job as a portrait artist as a teenager for a Disney owned art company in Dallas and Houston, Texas as well as Disneyland in California and Florida.  I had never had an art lesson, but my mother was an artist and I would paint and draw by her side, and draw everywhere I went. 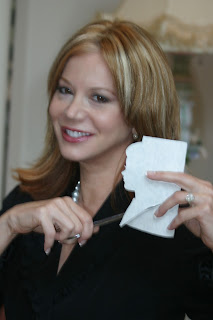 When I saw my first silhouette artist (not the kind teachers do as those are not artists, they are tracing a shadow from the wall, and a shadow is blocked light and a bit distorted), I had to try it!  I told the Disney art concession owner, Jess Rubio, that "I could do that!"  Meaning I could take strange scissors and tiny, thin black paper and cut the likeness of someone sitting down or standing up directly from the paper without a sketch first, and in a few minutes.  I now can cut a portrait profile in  a minute with full details when I speed!

However, to tell you how to do it, please watch this video where I explain that the silhouette is a contour drawing with scissors. In the same way you measure facial features with your thumb to draw, you measure them with your scissors to cut.  The type of scissors is not key.  Looking at the person (or pet, house, scene) is crucial and getting the perspectives correct as well as the features correctly is as important as and how they combine. Please don't judge the way I explain the art, I did not mean to come off "arrogant", I was merely nervous as I had so much to say (not rehearsed) and in a few minutes. Please be kind, if you leave a comment!

The best way to practice cutting is to buy barber scissors, or any medical scissors, and to order HyGloss silhouette paper from a school supply store.  Get it pre-cut as you want your artwork to be a miniature, not large, as that is the true art size.  The large ones are the ones traced from the wall or painted by someone who can't cut a silhouette from sight. Use the white side of the paper to cut if you have real silhouette paper from HyGloss, as shown in the video and photo.  Otherwise, tape white paper to your black paper to see what you are cutting as you work!

You can start by sketching and cutting, until you are able to figure out how to directly cut the portrait.  It is normally of the profile. But for fun, I have done cut artworks of front views and front view scenes. 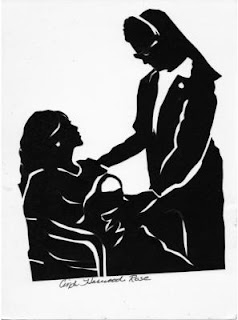 I got the job as a "silhouette artist" the next day after I attempted my first hand-cut silhouette. Working in a large amusement park is the best practice.  I would tell people that I would cut their portrait (not their face) and if they did not like it, they did not have to buy it!  Oddly, almost everyone bought it, as I was very friendly, which is also important when you work with corporations, in public events, private functions, weddings, holiday parties, or Bar and Bat Mitzvahs.  I also try to flatter people, and that means leaving off some of the double chin, or making their bodice slimmer.  This is called "artistic license."  I also would come home and get magazines and practice cutting the faces and people out from the magazines as a way to learn to directly cut profiles and full bodies from sight. 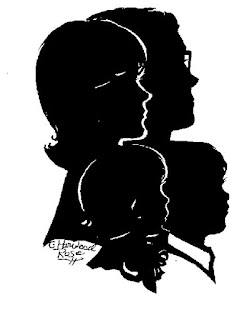 You can always cheat by the Photoshop, or taking the profile photo and taping black paper to it, and cutting that out.  It will lose details and be "less of who you are" not more, which a true silhouette should be 4 D, not 3 D, or 2 D.  It should incorporate personality and feeling.  The ones done from photos are taking something 2D and then altering it.  This is true of the wall tracings, which require an overhead light and paper taped on the wall.  You actually have to cast a shadow and then draw the shadow (ask the person to not smile as teeth do not look good in profile cut paper silhouettes). Next, you cut that out, with any scissors.  This is not an accurate silhouette which is named after a French minister of finance, who loved the real silhouettes by a real silhouette artist named Augustine Edouard.  He was appalled at the wall-traced ones and the ones by a physiotrace machine as in the Peale Museum.  Those are simple and the elaborate ones with details are the ones you want to emulate, not by computer design as those are not in human proportion.  I notice the necks and back of the heads are off with that.  The art should be authentic, and you should give it a shot.  If you then want to do it the other-way (photo, cutting that after pasting black paper behind it)-- go ahead.  Silly silhouette thoughts to you, for sensational silhouette memories!  http://www.silhouettesbycindi.com
Posted by Art smart at 10:30 PM No comments: 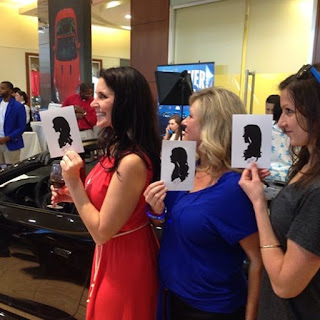 Regardless if you are having a business convention, holiday party, fashionable store style function, silhouette artist Cindi Harwood Rose can WOW your guests and give them a keepsake in a minute a person.  Not only is she the world's fastest silhouettest, she is the top paper profile professional freehand cutter in history! Watch the video and see how Cindi just looks at you and hand-cuts an amazing detailed portrait.  She has been hired in New York City for Mac, Bergdorf-Goodman, fashion week, Saks Fifth Avenue, swanky weddings, Levi's, Tootsies, PaperMag.com, in Dallas for the showrooms, for Houston Fashion Week, the Europec OTC, Auto shows, Canadian audiology conventions and almost any business you can think of.  Corporations or bride and grooms can add their logo to the card-stock or gift each person with a frame. http://www.silhouettesbycindi.com 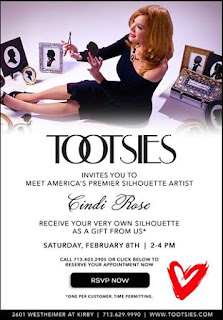 Cindi travels world-wide to do silhouettes of clients, and can cut more silhouettes (of great detail) per hour than any other silhouette talent anywhere!  It is the real art, she does not need to sketch first.  She can also sketch portraits, but the accuracy of directly cutting the profile is excellent, and she can do groupings together, as seen below!  Very few silhouette artists have mastered the groupings which are so popular for families and couples! 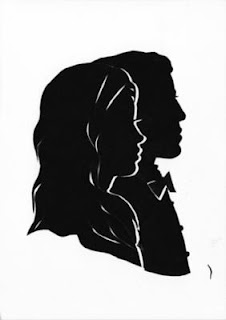 For more information, you can e-mail CindiSilhouettes@gmail.com
Posted by Art smart at 9:39 PM No comments:

Weddings are sentimental.  They are celebrations of love and union.  When choosing gifts and favors there is nothing more special than a hand-cut profile by a real silhouette artist.  Most people have never seen an authentic silhouette artist.  A true silhouettest merely looks at the subject with real French silhouette paper (white on one side, black on the other, very thin, very black paper, acid-free, costly) and in miniature (not large that has less value) they cut the profile out in two minutes or less.
You can see from this photo and video of silhouette artistry for wedding guests and entertainment that even children find this art amazing and fascinating!http://www.sihouettesbycindi.com 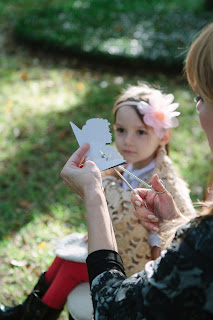 The most Famous silhouette artist Cindi Rose hand-cuts profiles of the famous for over 35 years! 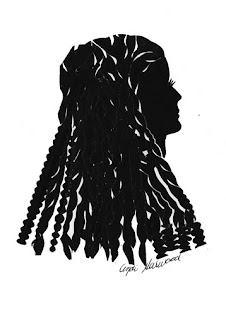 Silhouettes of celebrities at
non-profit and political events by Cindi Rose won her an award as a "Women of Distinction" as she donates her money to various causes from her art proceeds and philanthropy work.  The first silhouette is of Bo Derek done for the Motion Picture Industry, as Cindi has had speaking parts in movies as Cindi Rae Rose and Cindi Harwood and was Sag-Aftra.  The second silhouette is Barbara Bush done for the "Friends of Nursing" in Houston, Texas.  The third is music great composer, Isack Pearlman done for the Houston Symphony, at an event Cindi Rose helped chair and underwrite. The silhouette of President Obama was done at one of his early political campaigns.  The one of Vienna Giraldi of The Bachelor was done for Cindi's husband, noted plastic surgeon, Dr. Franklin Rose.  It was to show the patient what her before and after "nose-job" would look like.  Patricia Arquette had her silhouette done to save Haiti. Cindi gave "love" to offer housing to victims of Haiti, with her silhouette proceeds.  Finally, music legend, Liberace, had his silhouette done by Cindi Harwood at Disney World.  The guest relations always knew that Cindi would kindly do any celebrities silhouette in the park.  Cindi Harwood Rose has done more celebrities in person, than any other living silhouette artist of this era. 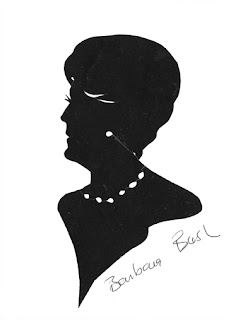 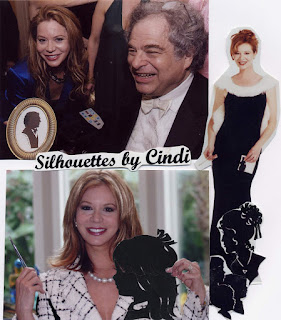 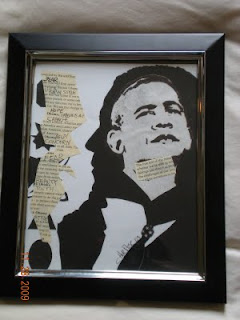 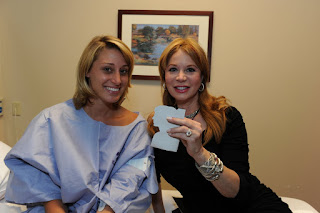 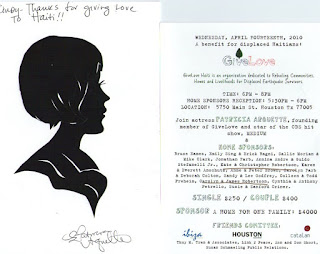 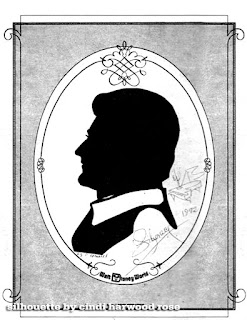 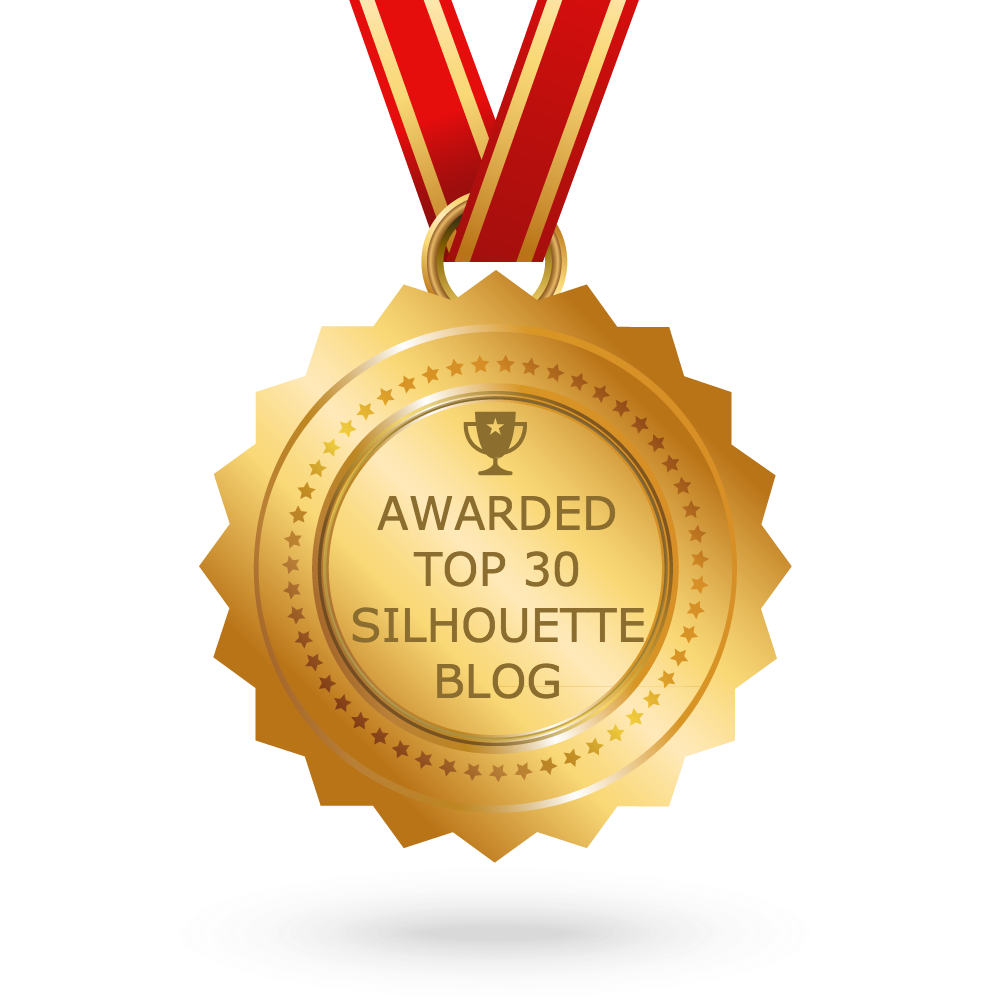